The UAE welcomes over 30,000 participants to ADSW each year to showcase their commitment to sustainability 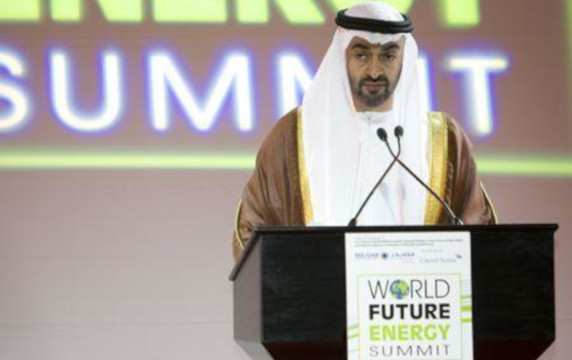 The WFES has been a crucial enabler to the growth of the renewable energy sector in the Middle East and around the world. Since its inception, WFES has welcomed more than 300,000 visitors and hosted around 7,000 exhibitors.

In 2009, The Zayed Future Energy Prize is held for the first time. In its first 10 years, the Prize added various categories and expanded its reach by rewarding an ever-increasing number of visionaries, innovators and pioneers, in the field of renewable energy.

Over 352 million people have been directly or indirectly impacted by the sustainability solutions and school projects of the 86 recipients of the Prize winners since the first awards ceremony in 2009. 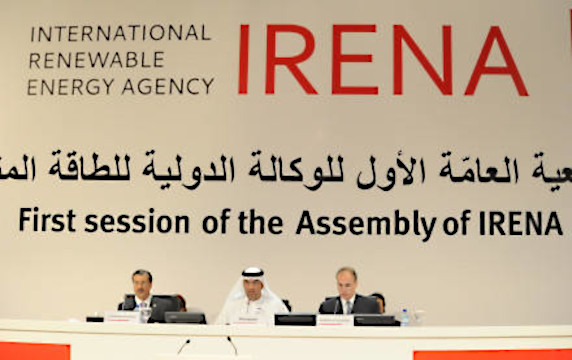 In 2010, the inaugural Assembly of the International Renewables Energy Agency (IRENA) is held in Abu Dhabi.

The Assembly is the ultimate decision-making authority of the IRENA, which aims to accelerating the global energy transition. Since the first IRENA Assembly, membership has increased from 85 to 180 Members and States.

The expansion of the week’s events and activities proceeded to the formation of Abu Dhabi Sustainability Week.

In 2012, the United Nations Secretary-General, Ban Ki-moon launched the International Year of Sustainable Energy for All during his address to the opening ceremony of the fifth World Future Energy Summit, stressing the need to end energy poverty to ensure equal opportunities.

During his speech, Ban underscored the need for universal energy access and innovation to scale up clean energy and energy efficient technologies, and stressed the importance of reducing greenhouse gas (GHG) emissions and improving energy efficiency. 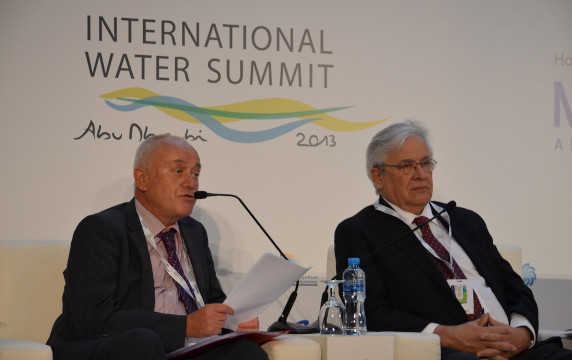 The Summit gathered leading minds from the global water community in policy, business and science to accelerate the development of sustainable water solutions for arid regions. The Summit was held alongside the World Future Energy Summit, as part of ADSW. Activities included ministerial high-level panels, discussions and presentations by water experts, and an international exhibition. 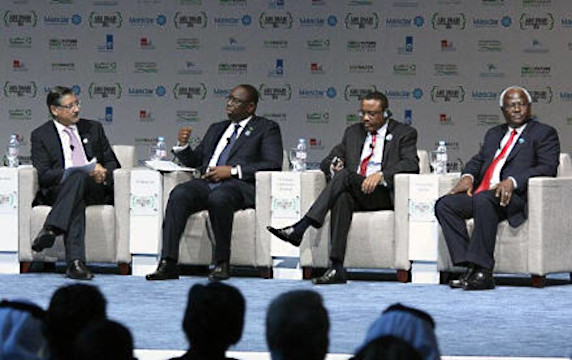 The ADSW program included a panel on the future of renewable energy development in Africa, which was moderated by Adnan Z. Amin, former director-general of the International Renewable Energy Agency (IRENA), and addressed the opportunities for economic growth in Africa and what the continent needs to grow sustainably. 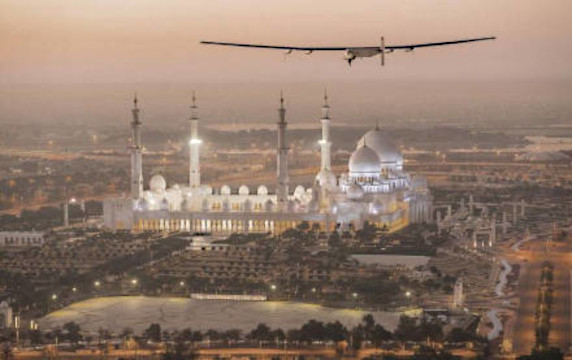 During the 2015 edition of Abu Dhabi Sustainability Week, Solar Impulse 2, the Swiss long-range experimental solar-powered aircraft was put on display ahead of its round the world flight. The project's goals were to make the first circumnavigation of the Earth by a piloted fixed-wing aircraft using only solar power and to bring attention to clean technologies.

Masdar, the official host partner of Solar Impulse 2, welcomed the crew back to Abu Dhabi at Al Bateen Executive Airport in Abu Dhabi on July 26, 2016, returning to the city where its historic adventure began. The historic journey of the world’s most famous solar plane, broke eight world records and travelled 42,000 km, recording 500hr flight hours without using a single drop of fuel. 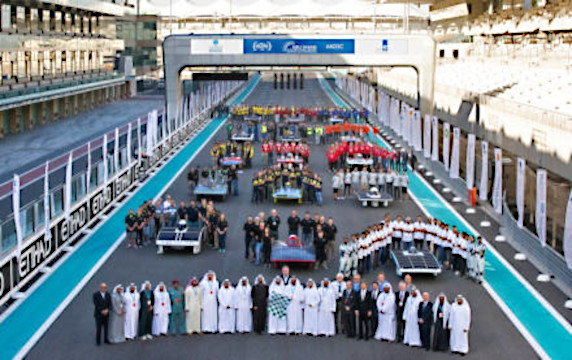 The ADSC culminated in a parade through the capital ending at Abu Dhabi National Exhibition Centre (ADNEC) during the opening ceremony of the World Future Energy Summit. Over the course of four days, the event saw fifteen-university solar car teams from twelve countries travel approximately 1,200 kilometres. 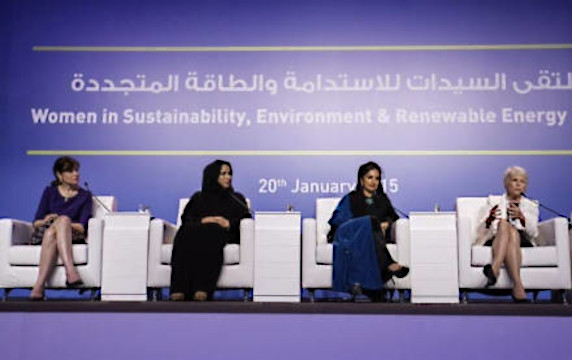 The 2015 edition of Abu Dhabi Sustainability Week hosted the inaugural ‘Women in Sustainability, Environment and Renewable Energy’ (WiSER) forum. The WiSER platform, which is a Masdar initiative, focuses on mentoring, empowering and inspiring women to be catalysts of innovation, leaders in industry and drivers of commercial solutions. WISER was officially launched on the sidelines of the 70th United Nations General Assembly in September 2015. 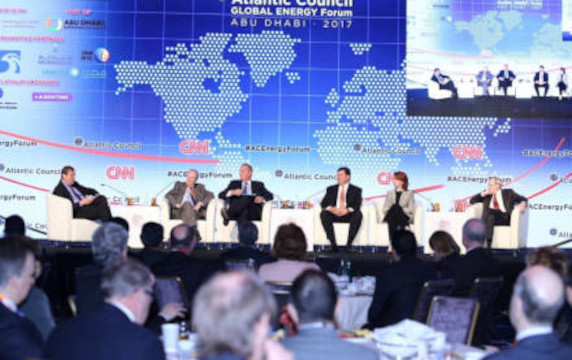 In 2017, Abu Dhabi Sustainability Week welcomed the Atlantic Council to the week’s program as it held the first Global Energy Forum, which convenes the world’s top energy and foreign policy decision makers to set the global energy agenda for the year ahead and examine the longer-term geopolitical and geoeconomic implications of the changing energy system. 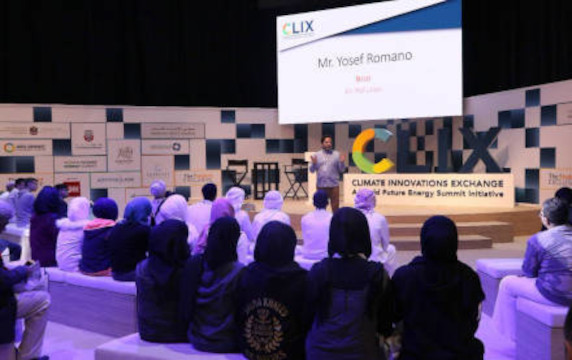 Launched in 2018 under the patronage of the UAE Ministry of Climate Change and Environment as part of Abu Dhabi Sustainability Week, CLiX, “Climate Innovation Exchange”, is a global marketplace that connects young entrepreneurs and innovators with investors to accelerate climate change solutions.

To date, CLiX has received over 1,100 applications from around the world, showcased 69 finalist inventions at ADSW and resulted in intended investment of over US$71 million. 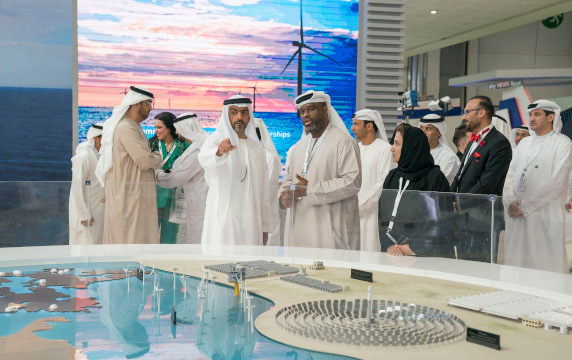 The 2018 edition of Abu Dhabi Sustainability Week set a record number of commercial projects announced during the week. The combined value of the projects totaled US$15billion and included:

•  Saudi Arabia setout is plan for that year to build around 4,000MW of renewable energy capacity, representing nearly US$7 billion, as part of the Kingdom’s aim of having 9,500 MWs of solar and wind capacity installed by 2023.

•  Yes Bank, India’s fifth largest private sector bank, announced during the World Future Energy Summit its plans to mobilize US$1 billion of financing for solar projects in India up to 2023 and US$5 billion up to 2030. 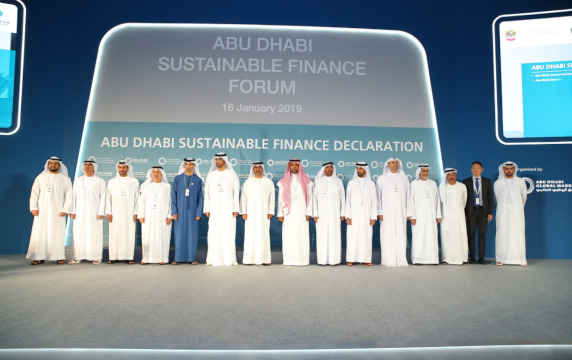 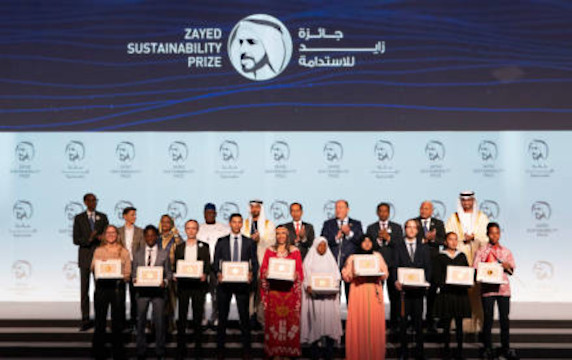 After 10 years of success as the Zayed Future Energy Prize underwent an evolution and strategic refocus to become the Zayed Sustainability Prize. The Prize broaden its focus to affect greater humanitarian impact by supporting a wider range of solutions to the challenges of sustainable development.

The first awards ceremony for the Zayed Sustainability Prize took place at the 2019 edition of ADSW. 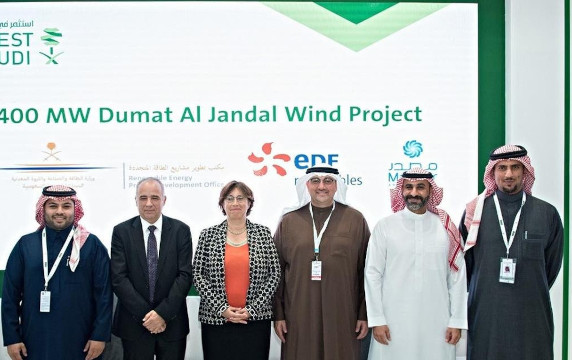 At the 2019 edition of Abu Dhabi Sustainability Week, Masdar announced with its partner EDF Renewables-Masdar the Dumat Al Jandal wind project in Saudi Arabia, the Kingdom’s first wind farm and the largest in the Middle East. The 400MW project will provide power at a record-breaking cost of 2.13 cents per kWhr. 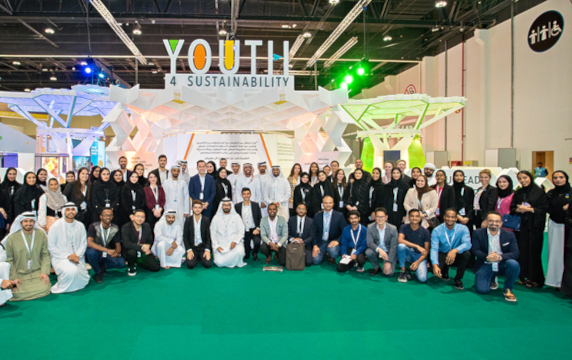 Y4S is a Masdar initiative, which invests in and actively supports the development of young people – enabling them to become the sustainability leaders of tomorrow. 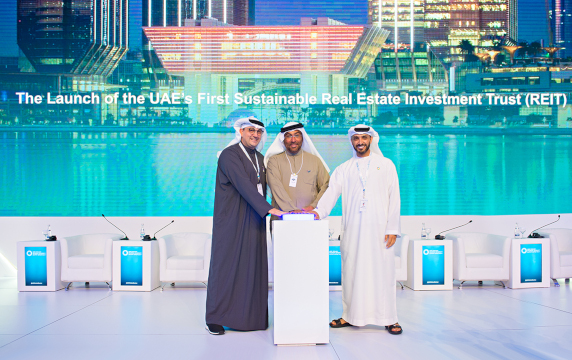 Taking place at the 2020 edition of the Sustainable Finance Forum, Masdar launched its Green real estate investment trust, which had an initial valuation from AED 950 million (US$258.7 million) to AED 1 billion.

The REIT was established at Abu Dhabi Global Market (ADGM), the award-winning International Financial Centre offering the first private REIT regime in the MENA region as part of its thriving business ecosystem. The REIT initially included four commercial properties within Masdar City and was launched as a Qualified Investor Fund, open to market counterparties and select clients by private placement. 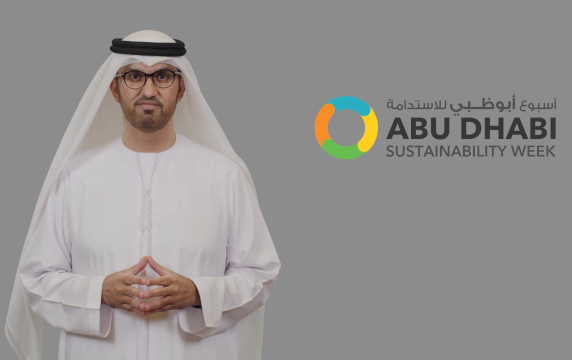 In response to the global pandemic, the 2021 edition of Abu Dhabi Sustainability Week was held virtually, allowing attendees and participants to safely engage remotely throughout the week.

The virtual ADSW Summit brought together leaders from policy, business and technology to define new pathways for delivering a green recovery in a post COVID-19 world. Taking place across three sessions, the Summit centralized around three pillars - Live & Move, Care & Engage, Work & Invest. Each pillar allowed participants and audiences to explore topics that are reimaging sustainable development and opening up social, economic and technological opportunities for delivering a green recovery. 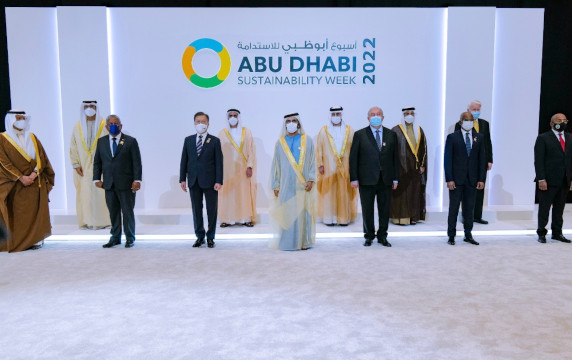