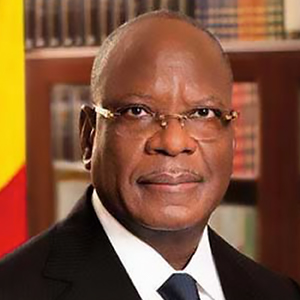 Ibrahim Boubacar Keïta (IBK) is a Malian politician born in Koutiala (southern Mali) on 29 January 1945. A member of Bamako since 2002, re-elected in 2007, he chairs the Rally for Mali (RPM), a party he created in 2001. Former student of the prestigious Parisian high school Janson de Sailly, Ibrahim Boubacar Keita continued his studies at the Pantheon-Sorbonne University where he obtained a Diploma of Advanced Studies (DEA) in Political Science and another in History of Contemporary International Relations (IHRIC).

After his studies, he was research fellow at the famous National Center for Scientific Research (CNRS) and taught Third World political systems at the University of Paris Tolbiac. Returning to Mali in 1986, IBK was involved in the economic and social development of his country as the European Union’s chief technical adviser for the European Development Fund (EDF), then in the NGO Terre men France, of which he was the director for West Africa.