UAE national family to move into the property in April 2017
Masdar to monitor building&rsquo;s energy, water and waste performance

The 405 square-metre Eco-Villa is the first villa to achieve a 4 Pearl rating according to the Abu Dhabi Urban Planning Council’s Estidama Pearl Building Rating System. It will use around 72 per cent less energy and 35 per cent less water than a typical comparably sized villa in Abu Dhabi, displacing an estimated 63 tonnes of carbon dioxide annually.

The cost of construction is similar to that of a conventional home of the same size; its energy and water efficiency will also reduce running costs substantially. The four-bedroom property is expected to consume just 97 kilowatt hours (kWh) of electricity per square metre.

Fully equipped with 87 rooftop solar panels, the prototype is capable of supplying as much as 40,000 kWh of electricity to the national grid. A suite of passive energy and water-saving design features further reduce its impact on the environment.

“The Eco-Villa stays true to Masdar City’s principles of sustainable urban development in that it is cost-efficient, environmentally sensitive and culturally appropriate in both its design and function. Because of its energy and water-efficient design, residents of the Eco-Villa will receive significantly reduced power and water bills.” 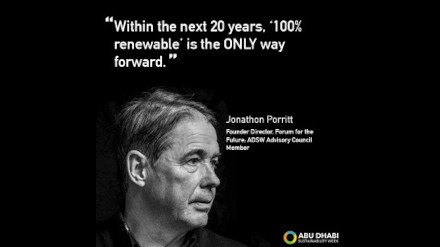 We asked our ADSW Advisory Council members, and here is what Jonathon Porritt, Founder and Director, Forum for the Future, had to say:

“Within the next 20 years, ‘100% renewable’ is the ONLY way forward. And this is the most exciting revolution unfolding in the world today!”

We look forward to carrying on the debate at #ADSW2018 in January. 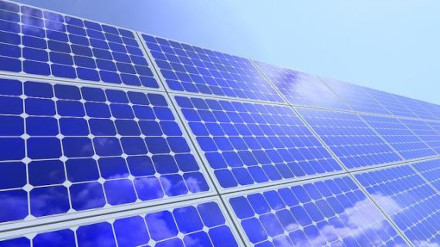 JP Morgan goes green and other trending stories of the week

@jpmorgan announced plans to facilitate US$200 billion in clean financing through 2025. They are also aiming to have renewable energy provide 100% of their global energy needs by 2020: https://www.jpmorganchase.com/corporate/Corporate-Responsibility/environment.htm

The joint project between @Statoil and @Masdar is a revolutionary technology that will allow for wind turbines to operate in deep waters where conventional turbines cannot: https://www.bbc.com/news/business-40699979

Financing big energy and other trending stories of the week

The East vs. West renewables race – who’s winning? According to CNN, it’s China by a lot:

Africa is unplugging, with off-grid solar leading the way:

VIDEO: The surprising state where solar energy is flourishing:

From rooftop solar to…everything. Check out SunRun via GreenTechMedia: