Through the transaction Statoil and Masdar have agreed to share the development risk and Masdar will cover 25% of previous and future costs.

Due to start commercial operation in late 2017, Hywind Scotland is the world’s first floating offshore wind farm. The objective of the Hywind pilot farm is to demonstrate cost efficient and low risk solutions for future commercial-scale floating wind farms.

“Having met with representatives of Masdar at the ADIPEC conference late last year, I am greatly encouraged by this substantial international investment in Hywind Scotland and look forward to the further development of this world-leading 30 MW project, which will be situated 15 miles from Scotland’s North East coast,” said Keith Brown, Cabinet Secretary for the Economy and Fair Work, Scottish Parliament.

“Major investments, such as this one made by Masdar, highlight the importance of continued investment in offshore wind, are a sign of increasing confidence within the sector, and position Scotland at the forefront of the global race to develop the next generation of offshore wind technologies.”

Located off the coast of Peterhead in Abderdeenshire, Hywind Scotland consists of five 6MW floating wind turbines anchored to the seabed. The farm covers an area of around four-square kilometres, with the average wind speed in this area of the North Sea is around 10 metres per second.

The ongoing construction of monopiles will be followed by assembly at Stord in Norway next summer, before they are shipped to Scotland.

“Masdar is excited to join the team developing the world’s first floating wind farm, and to build on our partnership with Statoil,” said Chief Executive Officer at Masdar, Mohamed Jameel Al Ramahi.

“Hywind Scotland represents the next stage in the evolution of the offshore wind industry, combining the project management experience and technical expertise of one of the world’s largest offshore energy players – and our own capabilities in renewable energy development acquired over the last decade in the UK and international markets,” Al Ramahi added. “We see tremendous potential in the commercial application of floating offshore wind technologies.”

The partnership also consists of a collaboration agreement which will enable the two companies to work together on clean energy technologies across several markets in the near future.

“The Hywind Scotland pilot has the potential to open attractive new markets for renewable energy production worldwide,” said Irene Rummelhoff, Statoil’s Executive Vice President for New Energy Solutions. We believe Masdar can be a strong partner also in future Hywind projects and we hope that our collaboration will result in future value creation opportunities for both parties.”

Hywind Scotland is the second offshore wind partnership between Masdar and Statoil after the Dudgeon wind farm, a 402MW project also due to come on-stream by the second half of 2017. 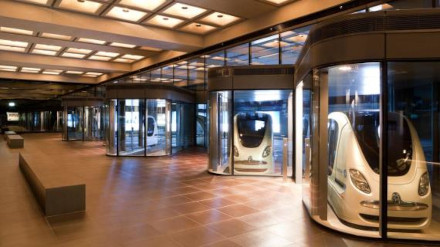 The competition was announced today during (ADSW), which runs from January 12-21. The competition is seeking viable mobility solutions that respect the economic, social and environmental pillars of sustainability on which Masdar City is based.

A Review and Advisory Committee of leading clean-tech companies and experts will help select the winning developer.

Emissions-free vehicular transport within Masdar City has, since November 2010, been provided by a pilot driverless Personal Rapid Transit (PRT) system which links the development’s northern carpark with Masdar Institute (MI).

“We have been a pioneer for driverless vehicles since 2010 and the PRT system has become an iconic feature of Masdar City,” said Yousef Baselaib, Executive Director of Masdar’s Sustainable Real Estate division, the developer of Masdar City. “More importantly, in carrying more than 2 million passengers, it has generated an immense volume of data to guide the future development of driverless vehicle solutions, both within the city and in other urban settings.”

He added: “We are now pleased to invite leading transport solution providers to help devise the future mobility roadmap for Masdar City, in line with the anticipated growth of the development over the coming years. This will enable us to benefit from the rapid evolution of driverless vehicles in recent years, while staying true to our vision for low-carbon mobility.”

Formal entry and evaluation criteria for the competition will be announced by the end of February. The selected solution must be driverless, autonomous and emissions free. An ability to operate outdoors in the arid, desert climate of the Gulf is essential, and the winning entry must also follow Abu Dhabi safety regulations, integrate with Masdar City’s pedestrian areas and with other types of vehicle transport. It will cover a 1-kilometre route linking Masdar Institute, the headquarters of the International Renewable Energy Agency (IRENA) and the recently announced My City Centre Masdar retail development.

“By introducing today’s commercially viable sustainable transportation solutions, such as electric and hybrid vehicles, into Masdar City, we can demonstrate their capabilities and play an important role in driving their widespread adoption,” added Baselaib.

According to IRENA, headquartered in Masdar City, transport accounts for around a third (30%) of total global energy consumption. Carbon emissions from transport have also increased 28 per cent since 2000, according to the International Energy Agency (IEA).

Meanwhile, the size of the global electric and hybrid vehicle market will account for 35% of global car sales by 2040, according to IEA estimates. This is 90 times more than the 2015 baseline.

The adoption of commercially viable sustainable transport solutions is a key focus of this year’s ADSW. A variety of products and solutions will be on show within the Sustainable Transport Zone at the 10th World Future Energy Summit at Abu Dhabi National Exhibition Centre.

Further illustrating the importance of mobility solutions at ADSW, Takeshi Uchiyamada, Chairman of the Board of Directors of Toyota Motors Corporation, will deliver a keynote speech at Abu Dhabi Global Action Day on January 16.

A low-carbon urban development and economic free zone, Masdar City serves as a “greenprint” for cities of the future. It seamlessly blends traditional Arabic architecture with state-of-the-art technology to maximise energy and water efficiency. Masdar City will host 50,000 residents and a working population of 40,000 people by 2030. 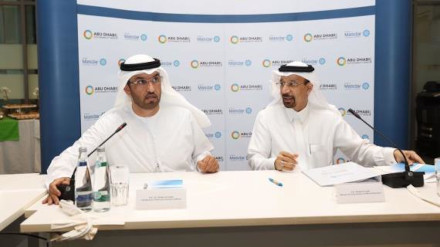 Abu Dhabi, United Arab Emirates; January 14, 2017 – A delegation of senior government and business leaders from the Kingdom of Saudi Arabia was yesterday given a tour of Masdar City, before taking part in high-level discussions aimed at supporting knowledge transfer and collaboration on energy programmes.

The delegation was led by His Excellency Khalid A. Al-Falih, Minister of Energy, Industry & Mineral Resources of Saudi Arabia and Chairman of Saudi Aramco.

The visit was a part of Abu Dhabi Sustainability Week, the Middle East’s largest gathering focused on addressing the interconnected challenges of energy and water security, climate change and sustainable development.

The delegation was welcomed by HE Dr Sultan Ahmed Al Jaber, UAE Minister of State and Chairman of Masdar, and a number of Masdar’s executives.

“On behalf of the Kingdom we appreciate your spirit of collaboration and your willingness to support the growth and development of new and critical industries,” said HE Khalid A. Al-Falih.

“We are in Abu Dhabi because we have a great deal of admiration for the work this nation has done to deploy renewable energy and apply clean technologies. Through this dialogue, we will achieve mutual benefit in terms of process improvisation in together reaching the ultimate goal of positioning renewable energy prominently within the energy mix.”

He added: “Saudi Arabia is incredibly close to launching its National Renewable Energy Program’s first round of tendering, and believes this to be an ideal opportunity at the perfect time for the Kingdom to gain insights from UAE’s renewable energy experiences.”

HE Dr Al Jaber, UAE Minister of State and Chairman of Masdar, said: “The UAE and the Kingdom of Saudi Arabia have a deep-rooted and long-standing relationship built on collaboration and economic partnership. Among our many areas of common interest, we share the same ambitions for delivering a diversified energy mix that offers the most compelling commercial proposition for our economies. Today’s meeting during Abu Dhabi Sustainability Week was a valuable opportunity for us to discuss our goals, exchange ideas and explore avenues of collaboration that will enable us to achieve our objective.”

In a panel discussion the Saudi delegation outlined the Kingdom’s clean energy roadmap as part of the Vision 2030, which includes installing a number of renewable energy projects.

The panel also heard a presentation on the UAE’s recently-announced unified 2050 Energy Strategy.

Attracting more than 38,000 attendees representing 175 countries, including more than 80 government ministers, and 880 exhibiting companies from 40 countries, ADSW is the Middle East’s largest gathering focused on addressing the interconnected challenges of energy and water security, climate change and sustainable development. 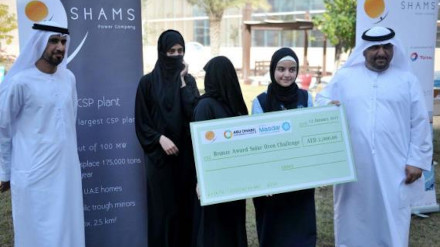 The winning teams in a school contest to build an electric oven powered by solar energy received their trophies and cash prizes at Shams Solar Power Company in Madinat Zayed yesterday.

Sixteen schools from Al Gharbia in Abu Dhabi’s Western Region challenged themselves over four weeks to create a safe, working oven powered only by the sun.

Grade 11 and 12 students competed in teams of four, with at least two of the team-members UAE nationals, and a budget of AED500.

The three winning schools who will be showing off their students’ solar-powered cooking technology at The Festival at Masdar City on January 20-21 are: Qatr Al Nada school from Madinat Zayed came in the 1st and 3rd place with two different teams; Al Baya school from Sila came in the second place.

The winning team received a cheque for AED10,000. Second-place earned AED5,000 and the school in third received AED2,000. At least half of the winnings must go towards a school project.

To win the challenge, teams had to build an oven that could reach temperatures of between 150 and 200 degrees Celsius for at least one hour. They also had to be able to bake a dish for the judges to eat, and explain how their cash prize would be spent to help their class or school.

“We were amazed at the ingenuity of all the competing teams and extremely impressed that so many school teams took part,” said Abdulaziz Al Obaidli, General Manager of Shams Power Company.

“The Solar Oven Challenge was a fun way to raise awareness of the potential of renewable energy. And there was serious message too, because millions of people around the world don’t have access to reliable and affordable sources of cooking fuel. Solar-powered cooking technology if applied on a wide scale could transform the quality of life of countless people.”